VEXATION:  a human resonates with the qualitative elements of the Shell or demon, allowing the spirit to appear within their personal environment. Resonance may occur through enduring and repeated destructive habits of behavior, speech and belief.

Negative habits of long-standing (over a year) which include self- and other-destructive fantasies, as well as thinking attached to materialistic non-spirituality, contribute to the setting up of resonance with the demonic.

When undergoing vexation, individuals may notice chains of bad luck, sudden recurring spells of fatigue for no medical reason, negative synchronicity where outer events appear to line up with inner destructive fantasies, moods and thoughts.

A magical link between the person's aura is "set" to resonate unconsciously by habitual destructive thinking, feeling and imagining.

OBSESSION: the psyche of the victim is influenced and even directed by the kelipah, particularly on the level of thought and feeling. While the Shell is operating upon the person's aura from outside, it has penetrated the individual's aura to some extent. Obsessing spirits can attack the egoic-spirit aura level (which is outermost) based on the individual's level of spiritual blindness This is generally due to lack of functional belief in the spiritual world. The astral-soul aura is nested within the egoic aura and is penetrated when violent and destructive thoughts predominate. The etheric-life aura, closest to the physical body, is made more vulnerable by evil imaginations and fantasies. Etheric penetration and vitality vampirism by the kelipot often results in noticeable lethargy and poor health.

POSSESSION: generally the astral-soul body is the goal for entity possession since it is the generator of I-awareness within the personality. The attacking kelipah wants to destroy the I-being which is the central, crowning point of choice within the human soul. Invading entities try to promote mental dullness, emotional reactivity and low vitality. The benefits of these mind-states for the invader are that the victim remains unaware of the intrusive and commanding intelligence of the shell. The I-being or human ego is "drowned" in emotional reactivity. This means there is a loss of the ability to engage in self-reflection as well as self-distance as part of the observing mind. Over-stimulation of emotion drives a falsely generated etheric vitality, which allows the invader to feed upon and consolidate it's attachment to the aura. The invader, working through the etheric body, can then exert control over the speech and behavior of the physical body. This is the final goal of all demonic influence: to fully inhabit the human physical body.

The general process of demonic incursion is from the external environment within to the core psychosomatic form of the human personality. At vexation, spirits attached to objects, people and places which are encountered in the environment may stick to the outermost auric field of humans who resonate with non-spirituality, atheism and materialist ideologies.

Posted by Spondalux at 1:49 PM No comments: 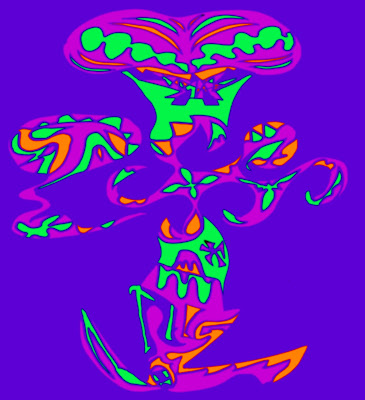 Posted by Spondalux at 9:55 PM No comments: 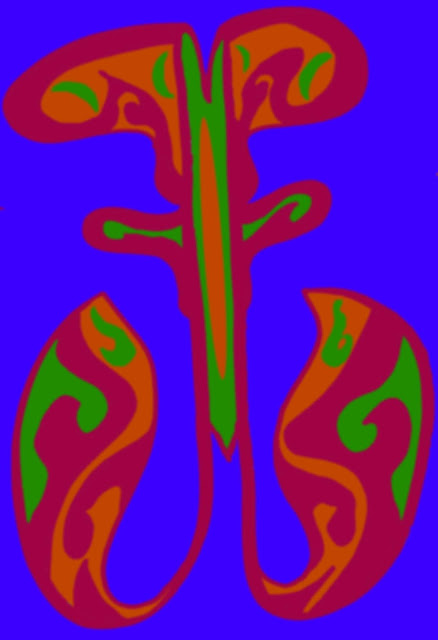 Posted by Spondalux at 3:46 PM No comments:

I imagine that there really is no more than an apparent separation between our subtle bodies. It is the human I-being that defines culturally influenced categories and criteria of separateness, individuality and independence. Our modern culturally determined mode of consciousness demands that we view ourselves as individuals, separated from Nature, the Gods and totally independent from each other.

It is possible to imagine that our spontaneous feelings, though we believe them to be hidden treasures in our souls, may in occult fact be the outer edges of passing daimons. It is as if we are moving, breathing, feeling and thinking into and through a cosmic ocean of fluid forces, radiating intelligences, flowing rays and expansive spheres. The denizens of this active and dramatic cosmos are invisible to our sight, silent to our hearing. However, our own subtle bodies (etheric, astral, spiritual) are infused and woven into this dynamic soul-spiritual world in which we live.

Close to us within the inner world, daimonic beings are often pictured as colorful spheres of magical influence. These daimons may be clothed in bodies composed of cosmic feeling-soul while their point of consciousness, pictured as the center of the sphere, is anchored in thinking-soul. It is the coincidence of the daimon's vehicle with our astral-soul body which we experience as our personal feeling! Sometimes we experience an idea we've never had before that motivates us to take new action in our lives. Perhaps this new idea is the thinking-soul vehicle of a daimon whose point of awareness is located in cosmic spirit world. This daimonic being may have been directed by the Gods into our personal sphere to inspire a new way of life. Or perhaps the being was simply passing on its providential course through the cosmic thinking-soul to attract and influence any human it encountered into a new way of life.

Physical bodies appear separate due to the 80 or so year periods of time involved in their  emergence from material substance and subsequent decline back into that substance. Developed shapes emerge into soma-types recognized by human cultures. These material shapes inevitably undergo slow inertial changes through interactions with other material shapes and physical conditions.  Ultimately, over long periods of time, material shapes dissolve back into their original unity with material substance. Matter that has been formed and shaped by intelligence can be considered "alive." On the other hand, unformed, "chaotic matter" can be considered "dead." Shaped matter is vitalized by elemental beings who nourish and care for the livingness of physical shapes.

Raw minerals exist as veins of ore locked into hills and mountains. In this state, elemental beings work and weave in the darkness and silence of the mineral bed; growing very slowly, the mineral is still in a natural state, nurtured by elemental gnomes and pygmies. Once human ingenuity contacts this hidden treasure, it is excavated, mined, shipped to factories and processed by extreme heat. The transmuted ore is mixed with other alloying minerals and chemicals, shaped in it's molten state and finally hardened as a finished product. We can say that human design takes over from the natural state of the uncultivated mineral.

Original Human Archetypes, contacted by the perennial smart inventors of new sciences, machines, arts and objects, reside within the sphere of spirit world which is most available to humanity. These thinkers recognize the archetypes that are required to manifest objectively within the cultural moment. Once the facets of the archetype take root within the thinking-soul of the human host, the elementals of thought do their work. Elementals of thought are under the guidance of the Knight of Swords whose quality is Fire of Air. We can imagine these thought-beings as youths who ride the hot winds, panting towards a goal, pointing swords of light as they make their headway, hunched over the back of flying horses, exhaling heated breaths before them as whirlwinds and vertices of hot, surging breezes.

Human intelligence creates tremendously complex buildings, cars, clothing, tools, factories and all the physical objects of our various cultures. Some of these objects are designed to influence heat-generating technologies (combustion, controlled explosions, ect). The heat itself is enlivened and woven through by fire elementals who have a kind of co-intelligence in groups, but not as individuals. Nature's volcanoes, on the other hand, are enlivened and cared for by greater elementals who have their own groups of lesser elementals that follow the patterns generated by the central volcanic being.

The complex physical process which results in lightning was often seen by our ancestors as sky and weather Gods like Zeus, Yahweh and Thor. I would say that Zeus does have an elemental level of manifestation, in that most Gods are multidimensional. In the spirit world Zeus is the Atmospheric Archetype. In the astral-soul world He is Atmospheric Soul. In the etheric-life world Zeus manifests as Atmospheric Life. In the mineral-physical world He manifests as Atmospheric Expression, the storm itself. In each of the four worlds Zeus is actively working through Elementals (in the physical world), Daimons (in the etheric world), Angels (in the soul world) and Archangels (in the lower spirit world). He is always Himself in the highest, most sublime fiery spirit world. He is unlimited in creativity, formulation and expression of Himself and all His associated phenomena.

Elemental beings enact the patterns of vitality produced by daimonic beings. Daimonic beings are impelled by the powerful thought-forms of angels, who work in groups under the mastery of archangels. Archangels are interwoven into the demiurgic, creative Mind of the Gods which is composed of the archetypes of ideas. The Gods share and co-create the One Idea that is the originating Root of all beingness and existence.

Posted by Spondalux at 4:07 AM No comments:

Four Aeons and States of Consciousness

This table of Aeons is derived from the wonderful work of Maggie Ingalls, inventor of Maat Magick. I believe that we have choice as to which of these states of Human Consciousness we want to access. Because contemporary people are living in the Aeon of Maat, we have free belief which lets us investigate former structures of spirituality, ego-developments and states of awareness.

Dream consciousness is a trance state in which pictorial imagination can be interacted with spontaneously.

Magical consciousness can be experienced as interactions with many daimonic intelligences in whom we are immersed, while also maintaining our human distinction.

Rational consciousness is the structure of awareness of our modern materialist, science-based culture.

Double consciousness is similar to Rudolf Steiner's "consciousness-soul" which he considered to be emerging globally as a way of dwelling in ego-distinction as well as the Higher Self at the same time.


Posted by Spondalux at 4:06 AM No comments:

We are the bees of the invisible


“We are continually overflowing toward those who preceded us, toward our origin, and toward those who seemingly come after us. ... It is our task to imprint this temporary, perishable earth into ourselves so deeply, so painfully and passionately, that its essence can rise again “invisibly,” inside us. We are the bees of the invisible. We wildly collect the honey of the visible, to store it in the great golden hive of the invisible.”

Posted by Spondalux at 4:05 AM No comments:


Each Solar Return the spiritual powers of the Sun provide an influx of mystical seeds into the human astral body as new life energies, virtues, powers, and aspects of the Sun God. They are the spiritual seeds of human possibilities and if consciously nourished will evolve into powers and states within the astral-soul body which correspond in their activity to our hidden spiritual attributes.

Each Lunar Return, returning monthly at the natal degree position, the Moon nurtures these hidden seeds endowing them with magnetic life force for new growth. She brings them down into the etheric-life body, conferring upon us the powers and possibilities of magical forces and liberating states of consciousness.

Posted by Spondalux at 4:05 AM No comments:

Spondalux
I have been studying, practicing and thinking about magic and Western occult topics since 1977 when I used to escape to the woods and draw down the Moon.